“Ok, let’s see the difference!”
He cracks open the shell of a defrosted pre-frozen oyster and takes a bite. Then, five seconds later, he bites into a fresh one.
“What!? The frozen one is better!”
He’s Professor Toru Suzuki, an expert on frozen food science at Tokyo University of Marine Science and Technology, and he was the first one to try the taste test at the Suzugawa Branch of JF Miyagi (Miyagi Prefecture Fishery Cooperative) in Minami-Sanriku, Miyagi Prefecture. 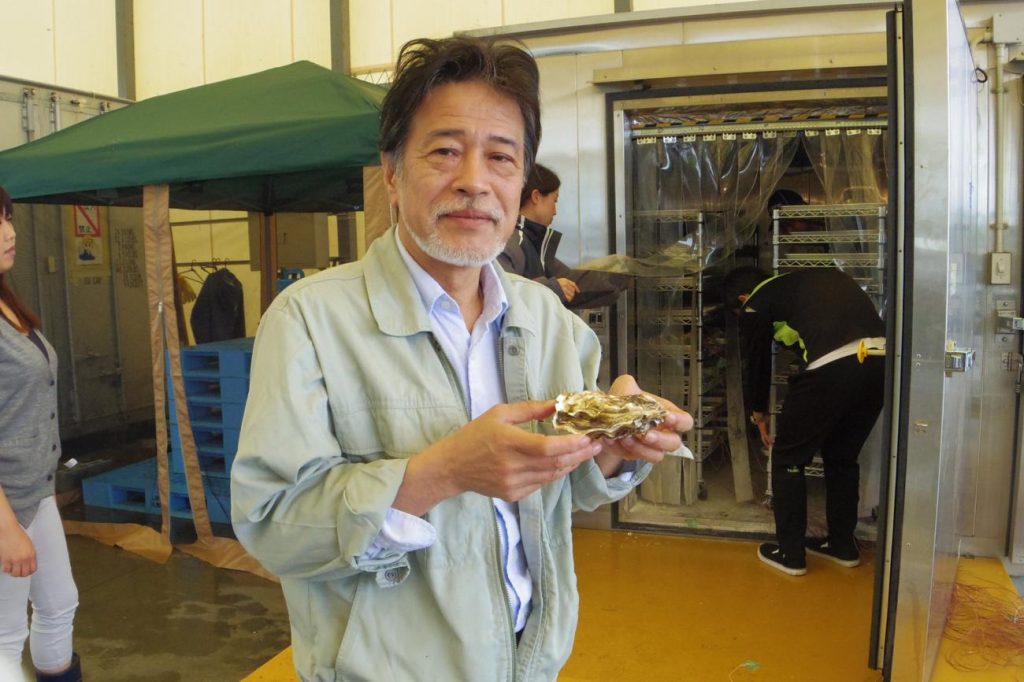 Next up was Norio Sasaki, the chairman of Shizugawa Branch Steering Committee, followed by other co-op members.

“It IS good!” they agreed with big smiles.

“After many experiments with that wonderful freezer,” says Sasaki, “we have come this far. I hope that these frozen oysters in the shell will mark a big step towards rebuilding our community.”

It has been five years since the Great Eastern Earthquake and Tsunami. Oyster farming, along with wakame farming, has finally returned to Shizugawa, but there is still not much happening in the area surrounding the bay. The former city hall building of Minami-Sanriku is now just a rusty steel structure standing alone in the middle of an empty sandy field. The office building of the cooperative was finally completed this June, five years after the quake. 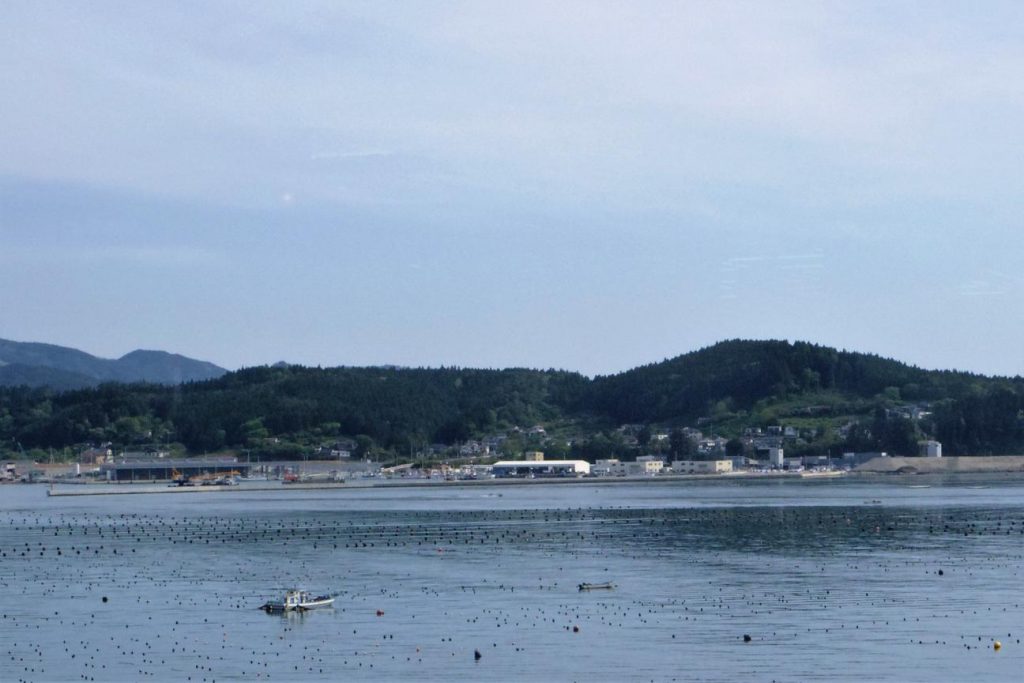 The “wonderful freezer” that is expected to lead the reconstruction is the ηmax Refrigeration System made by Nakayama Engineering.

With a research grant from the Ministry of Economy, Trade and Industry, Nakayama Engineering, in cooperation with JF Miyagi Shizugawa Branch, conducted experiments with the system for three years from April 2012 to the end of March 2015. With the help of Prof. Suzuki, the goal was to commercialize the technology and develop a new fishery business model to help rebuild the community.

In 2015, 3000 oysters were frozen while they were still in the shell. This year, full-fledged testing was conducted with as many as 20,000 oysters to prepare for the leap toward commercialization scheduled for next year.

You may be wondering, “Oysters in May? Not in winter?” Actually oysters are at their best in May just before spawning, as they become plump and their flavor is most concentrated. However, the market demand for oysters declines as the weather warms, and in some cases the harvested, delicious oysters may have to be thrown away without being enjoyed.

This is where the power of freezing comes in. Oysters in the shell retain their freshness when they are frozen and stored in an ηmax Rack Freezer, and they can be marketed as premium products in fall and winter when demand is highest.

In this year’s experiment we tried a new methodology, “large–temperature-difference” freezing.”

The highly efficient ηmax refrigeration system freezes food at an ultra-low temperature of –70℃; oysters in the shell freeze so quickly that their quality is maintained.

In the first two years of testing, oysters were first super-chilled and then frozen. Prof. Suzuki then advised us that instant freezing at ultra-low temperatures would maintain product quality almost as effectively as super-chilling and freezing. Our experiment proved him correct, and the result was the big success reported above.

Oyster farmers across Japan are very interested in the technology of freezing oysters in the shell. This experiment proved that the new technology successfully produces high-quality products while improving energy efficiency. This is a big step toward commercialization of the process.

Freezing process of oysters in the shell

After harvesting, the oysters in the shell are immersed in a tank of sterilized sea water for 48 hours. 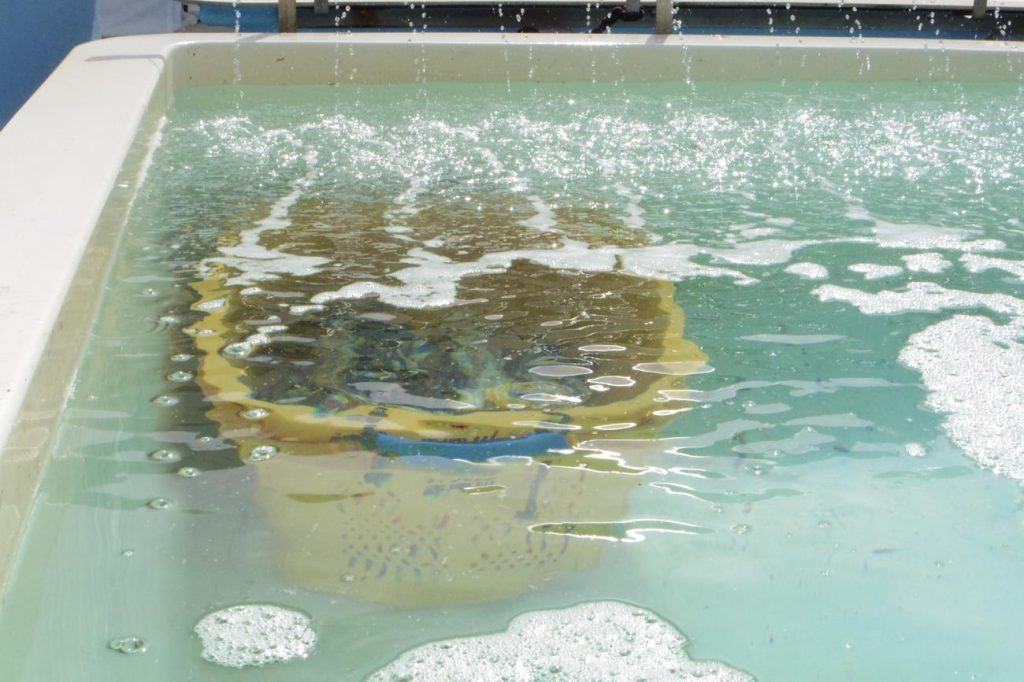 ◆ Sorting by size and placing on rack ◆

Experienced cooperative workers quickly sort the oysters into small, medium and large sizes, and a batch of 900 oysters is placed on racks. 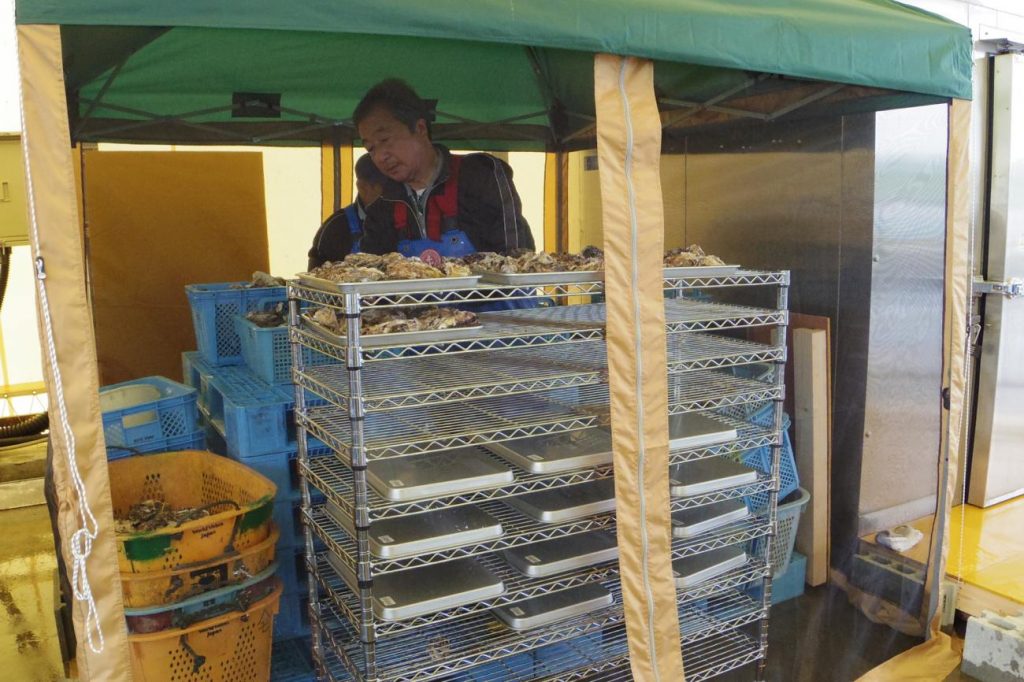 Within one hour, the oysters on the racks are rolled into the freezer and freezing starts with application of a large temperature difference.

During the first in a series of experiments conducted this year, temperature sensors were attached to 26 oysters to monitor their state during the freezing process.

Nakayama Engineering consulting service for freezing operation:
We thoroughly review and provide reports on the freezing process information gathered by sensors in each ηmax Rack Freezer. 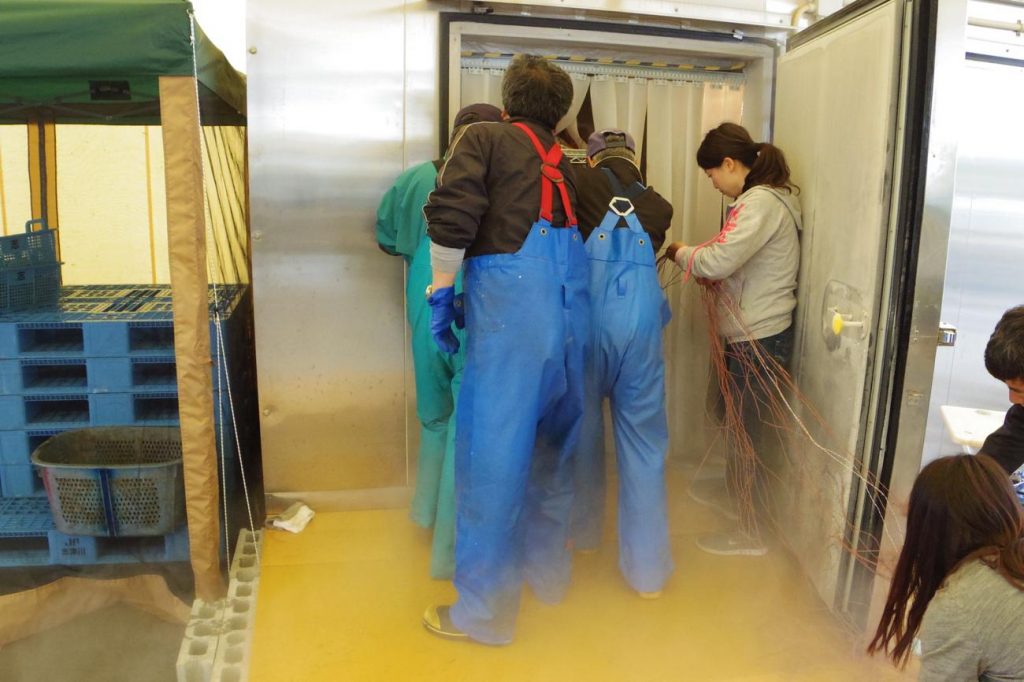 There are many types of freezers available, but it is not easy to freeze oysters in the shell properly because the shell acts as insulation. A conventional air blast system only freezes the surface first and takes time to reach the inside. A large-temperature-difference freezing system is much more effective, as it can remove heat quickly.

The ηmax Rack Freezer is so efficient and fast that the oysters are completely frozen in 50 minutes.

After freezing, the oysters are placed in a basket and quickly immersed in clean water to glaze them with a thin layer of ice. This is an important step to provide additional protection of the quality.

The frozen oysters are sorted by size, tightly sealed in a bag and packed in a box.
They are stored at a temperature below –25℃ until shipment.