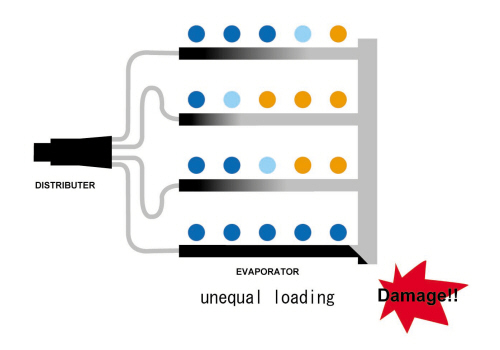 Managing low condensing pressure and small TD are the keys to better freezing
Normally, condensing pressure is designed to maintain a certain minimum level that avoids system problems. When operated at a condensation pressure of 0.9MPa to 1.1MPa or less the refrigerant conditions within the evaporator become so degraded that the refrigerant starts to backflow, damaging the refrigerator unit. Cooling capacity is also drastically reduced. As a result systems are designed and operated at higher pressures requiring more power input. Also, when the temperature difference (TD) between the refrigerant and the ambient air is less than 10°C, the system cannot produce sufficient freezing due to poor refrigerant controls and results in reduced efficiency.Both these conditions require the system to be operated in away that cannot take advantage of low ambient air temperature. So this energy saving synergy is lost.

A STANDARD FOR THE FUTURE EMRS PURSUES ACCURACY 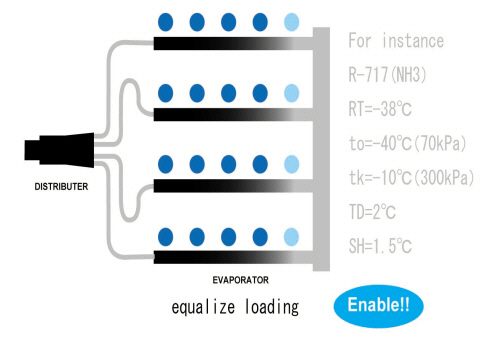 The emRS difference: Refrigeration at a low condensation pressure and a small TD.
The Eta-max Refrigeration System operates at optimal efficiency even with a minimum condensation pressure(0.3MPa) when the outdoor temperature goes down in winter. The same can be said when TD falls to 2℃. The emRS unit always behaves n an ideal manner in accordance with load changes. The result is as follows:

This results in the following Synergy effects : 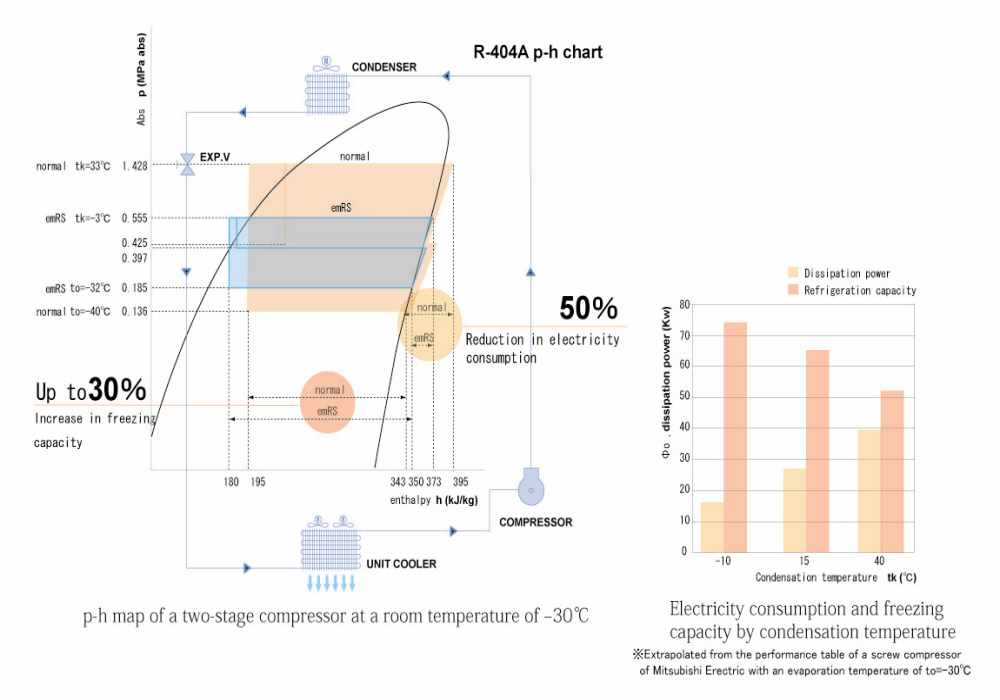 Unprecedented energy savings in refrigeration, thanks to low condensation pressures. 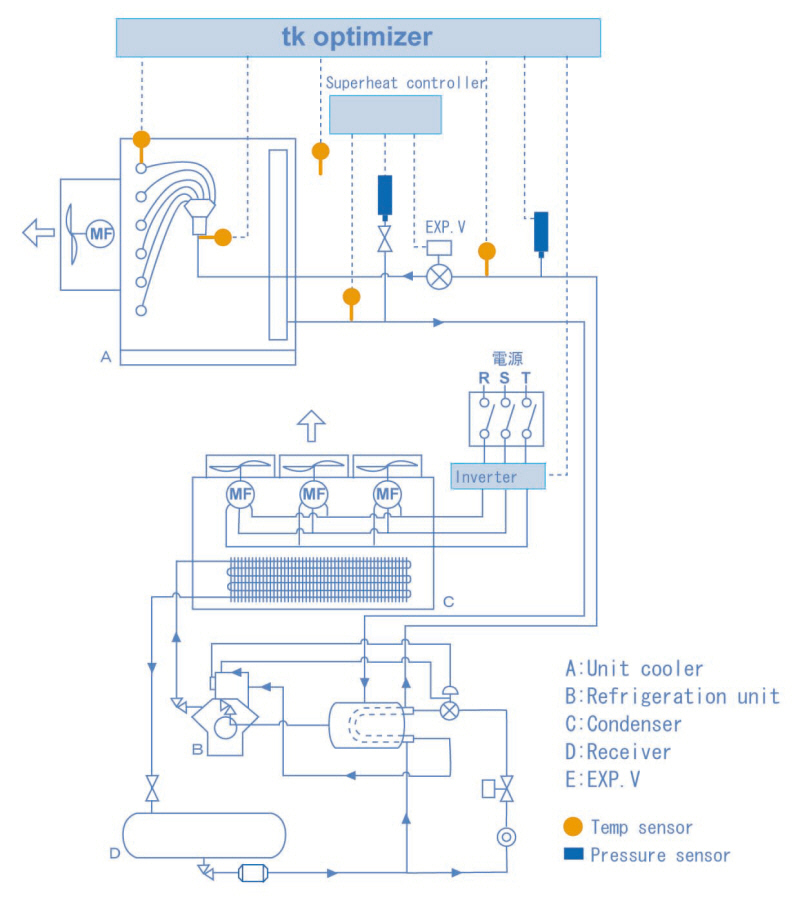 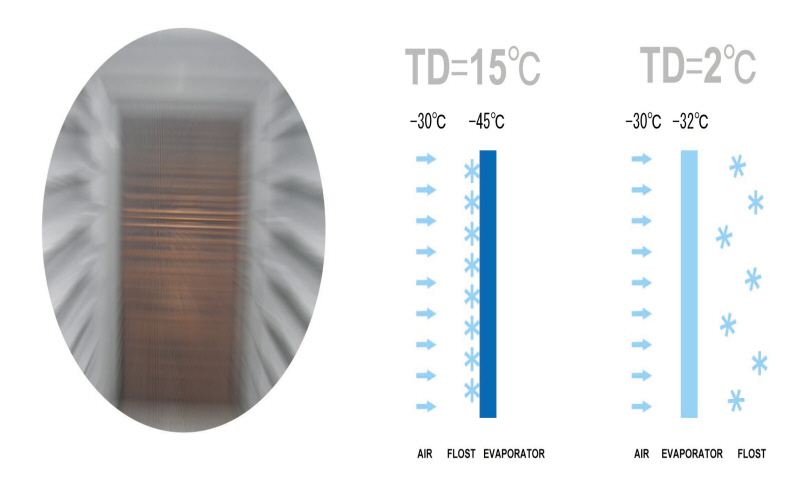 Fight the biggest foe of freezers: frosting on evaporators

The biggest physical challenge in freezer systems is the buildup of frost on evaporators. Typically, frost formation is assumed to be inevitable and has been solved through short-cycled defrosting using hot gas or a heater. Frost occurs when moisture in the air in the freezer room condenses and freezes on the surface of the evaporator. The larger the TD (temperature differential between the surface of the evaporator and the ambient air), the more likely it is that frost will be generated; this, in turn, increases TD. In conventionally designed systems, TD is usually set at around 10 to 15℃ or higher, requiring frequent defrosting procedures. emRS’s high-accuracy, low-pressure-differential refrigerant distribution technology has made it possible to maintain TD to within 2 to 5℃. This results in drastically minimized frost formation. 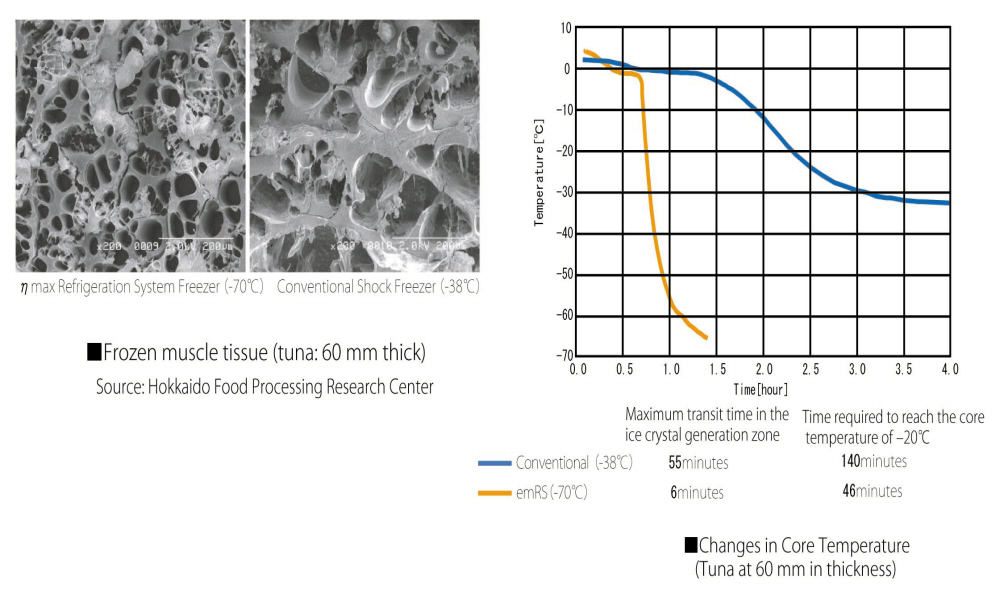 Cryogenic Freezing: R-404a produces –70℃ for commercial applications
With a two-stage compression unit, a cryogenic temperature of -70℃ is now a reality using a hydrocarbon refrigerant.

The quality of frozen food is dependent upon transit time in the temperature range where water in the cell structure crystallizes (peak ice-forming temperature zone: -1 to -5℃).This is common knowledge in the industry. The lower the internal tissue temperature, and with the right wind velocity, the shorter the time required for freezing. The shorter the time spent in the ice-forming temperature range, the less the damage to the tissue in the freezing process. This is because the water will solidify into minute ice crystals without rupturing the cell walls. Hence, a stable cryogenic temperature (below -60℃) is required for high-quality freezing. Up until now, however, special freezing methods such as nitrogen freezing or dual freezing have been required to achieve this. Eta-max Refrigeration System has succeeded at consistently operating the freezing process at a cryogenic temperature using the conventional freezing principle by developing a low-temperature differential operation.